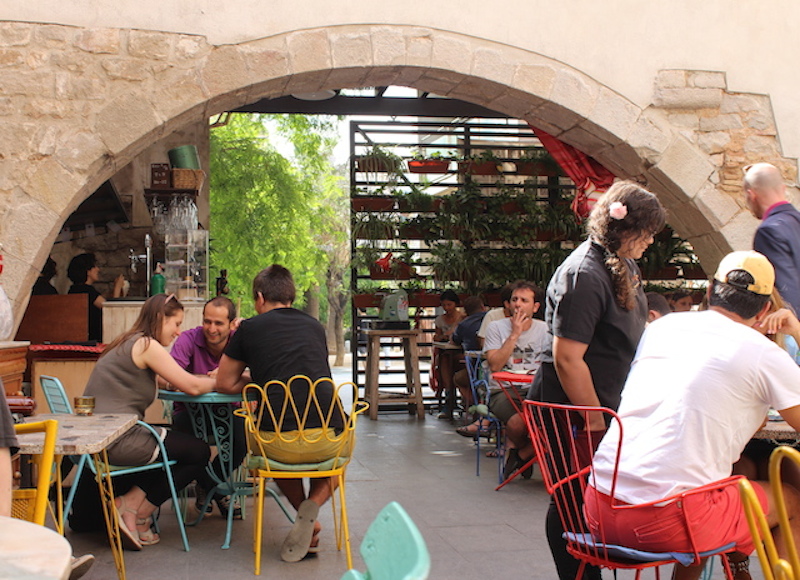 23 June 2014 | by Brigid McAleer
What’s in a name? Intelligent city, digital city, smart city: as always, it's what lies beneath where the real meaning and purpose are found. Brigid McAleer interviews Júlia López, Project Manager of European and Regional Digital Strategy, A.K.A Smart Cities, for the Municipality of Barcelona. An engineer by trade, López shares her understanding behind the concept of smart cities and why Barcelona is one of Europe’s pioneers in uniting technology and society.

Discussions of smart cities are increasingly a part of urban development aims worldwide. However, despite this celebrated approach, it is still hard to describe what lies behind the labelling phenomenon of the so-called ‘smart city’. How would you define the concept?

Well in your question you refer to ‘smart cities’ as a form of hype and a concept that has been gaining popularity and I fully agree with you. If you had been in the IT world, and not necessarily an engineer, you would realise that these are trends more related to marketing departments than to IT departments. When it comes to big IT multinationals trying to sell their products and services better, they are very good at making use of this hype: much better than we are as cities.
For example, ten years ago we were talking about intelligent cities, fifteen years ago we were talking about digital cities. In 2010, we started talking about smart cities and, I am sure that in five years’ time nobody will be talking about smart cities. However, we will still be talking about how we can use technology to improve our lives in cities and this is our definition of a smart city; it was our definition of an intelligent city and in fact it will survive well after we stop talking about smart cities.
A smart city should be a vision and a long-term strategy that is searching for a change in cities. Used wisely, this technology exists to create a beneficial change. And, for the city of Barcelona, this has been the inspiration of the smart city. There are as many approaches to the concept of the smart city as there are cities trying to become one, and this is exemplary especially in Europe. If you take a close look at America or Asia, this concept of smart city is not trending comparatively. However, European cities are constantly competing to become smart. As if we were doing silly things in the past!

ICT can play a key role in improving more intelligent uses of energy. What are the necessary prerequisites for a smart city to meet the goals of economic and environmental sustainability?

If you had asked me what makes the approach of Barcelona city council different from other European approaches, I would have said that in the case of Barcelona we are aiming at a transformation that is touching all areas of the city. Barcelona is aiming to transform the city from its roots and as a single unit. So going back to your question, you have referred specifically about the economy and the environment, and I would say that for us, it is the same entity.

However, if you want to refer specifically to the economy, I have to refer of course to the fact that Barcelona in terms of economy is one of the biggest cities in Spain, and Spain right now is in a big economic crisis. As public servants, we have the objective and the mandate to make the best decisions for our citizens and our citizens are individuals, but they are also companies.

So, when it comes to the economy, the concept of a smart city or urban technology as you may want to call it, is using technology for public good. It’s something that appears very strongly in start-ups and entrepreneurship in Europe and this is something that we believe can really make a difference in the technology field in Barcelona. So I think that we, as a city council, as public servants, have this role and this responsibility, to help them boost the economy in this arena. I truly believe that in the economic field smart cities can play a role when it comes to global competition.

Here, I would like to refer to another concept on which I have been reflecting these last few months and it is that cities are no longer belonging to nation states anymore. In the case of Barcelona, London, Paris etc., we are competing with each other. Barcelona is an internationally very well-known city, so I think we have a responsibility to take advantage of the fact that Barcelona is more of a global city than a local city and so we have to help these businesses make a push in their internationalisation and this is what smart city means for us when it comes to economics.

In the environment we have our own characteristics here in Spain. It’s very specific compared to other countries: we are compact cities, we have narrow streets, so our characteristics are different from those in Scandinavia for example.

Technology can play a role, in helping us gain environmental sustainability when it comes to electric mobility, when it comes to smart waste collection. So the idea is precisely to apply technology wisely in this arena. There is great faith in the positive effects of technological development, but as creative workers flow into cities, the difference between them and the technologically less active classes will grow bigger. How can this impact of polarization be prevented in order to create a more socially just city? What are the successful practices to involve the older generations and the computer-illiterate groups of society? It is true that when you are dealing with innovation and with technology there is a group of people that are at risk of being left behind.

I truly believe that we, the capable, have an objective not to forget this and to develop technological projects for the common good. As council workers, we have to develop projects that will make an impact on as wide a group of citizens as possible. For example, in Barcelona there are technology-based projects that have been designed precisely to overcome this digital gap. When you start developing them and deploying them and you see that they are really starting to create an impact it makes your work worthwhile. One of the first projects implemented by the municipality ten years ago, before anybody was talking about smart cities, is the Telecare project. The Telecare project which is still in use, is a technology-based scheme that serves around 70,000 people in Barcelona. The technological service comes in the form of a plastic necklace with a security button, which is given typically to senior citizens and other vulnerable citizens who live alone. The citizens wear this necklace and if they need some medical assistance or have an emergency situation they press the button and immediately they are called, and if they don’t respond to the telephone, there is a group of special workers that will go to their houses and take care of them. A more recent project being piloted right now is called Vincles, which means buildings in Catalan. I would say in my own words that this is the evolution of the telecare project, so ten years after we are completely reviewing the process. Vincles has been put into action thanks to a monetary award of 5 million euros from the Bloomberg Mayor’s Challenge Award. Barcelona was selected first out of more than 100 candidacies and with such a large funding, the project can now deploy a city-wide scale. Vincles is a technological solution, given to senior citizens that are living alone in their houses. The focus is again on this group of 70,000 citizens that are living alone in Barcelona.

We have developed software that replicates an online social network made up of close relatives, friends and neighbours of these citizens that are living alone. A typical network would be composed mainly of family members that are taking care of their relatives, but also of those people who would typically have a daily interaction with this senior citizen. For instance, the butchers or the bakers around the corner, that the person visits each day.
The scheme provides a tablet to each of the senior citizens with very easy to use software designed especially for seniors so they can connect with their family directly; they can make video calls and it’s also a way for connecting their closest network with each other. For instance, if the butcher does not see the senior citizen for two days he can alert the family and the family can go there and check if everything is alright. The tablet and software bring senior citizens an easy connection with the special people in their network, and the same people are also connected with each other.


What have been the lessons learnt during smart development?
Yes, we have some lessons learnt that I would like to share with you after years of work. Basically you need to know what you want to be when you grown up! It is essential to have a vision that is far beyond the typical political four-year mandate. In order to make an impact on your city you need to think about a long-term transformation and this is one of the first lessons that we have learnt. The second lesson learnt is that you have to overcome the despot.
As public servants, we don’t have a cure for everything. So you need to give space to academia and the private sectors also. This is very difficult, however, it is also very positive for cities.
The third lesson is to work transversally in cities. It doesn’t really make sense to work in isolation - the energy department, the water department, the IT department - you have to make task forces that work for projects not for departments. This is what we have been trying to do these last four years and I would say that after doing a lot of internal pedagogy, we have been quite successful. For me they are the three most important lessons learnt.


Barcelona is envisioned to be a showcase of the EU-funded Grow Smarter project along with Cologne and Stockholm. Can you explain a bit the process and integration between the three cities on this Horizon 2020 project?

The Grow Smarter project is not only an approach to make us, Cologne and Stockholm work together, but it is also a project that is working at the same time in three categories: technology, energy and mobility. We are developing twelve smart solutions. So the twelve smart solutions are happening at the same time across the three cities and each solution is going to be deployed across each of the three categories simultaneously. Being a lighthouse city is a considerable responsibility. It is also difficult. Barcelona, Stockholm, and Cologne, the three cities involved are each very advanced and everybody has their own agenda. Accordingly, these European projects are aimed precisely at aligning these agendas and this is the main challenge. Of course the twelve smart solutions are important, but the most important one is that Europe is aligned and a working solution is produced. At the moment, we are very positive I think there are only three lighthouse projects funded and we have the feeling of being pioneers. Personally, for me, the Grow Smarter project is the most challenging yet brilliant project I have faced in my 10-years of working for the city of Barcelona. The main challenges are to reduce energy use by 60% in the 12 smart solutions and create 1500 jobs in Europe.

Barcelona Bears the Burden of a Lighthouse Smart City