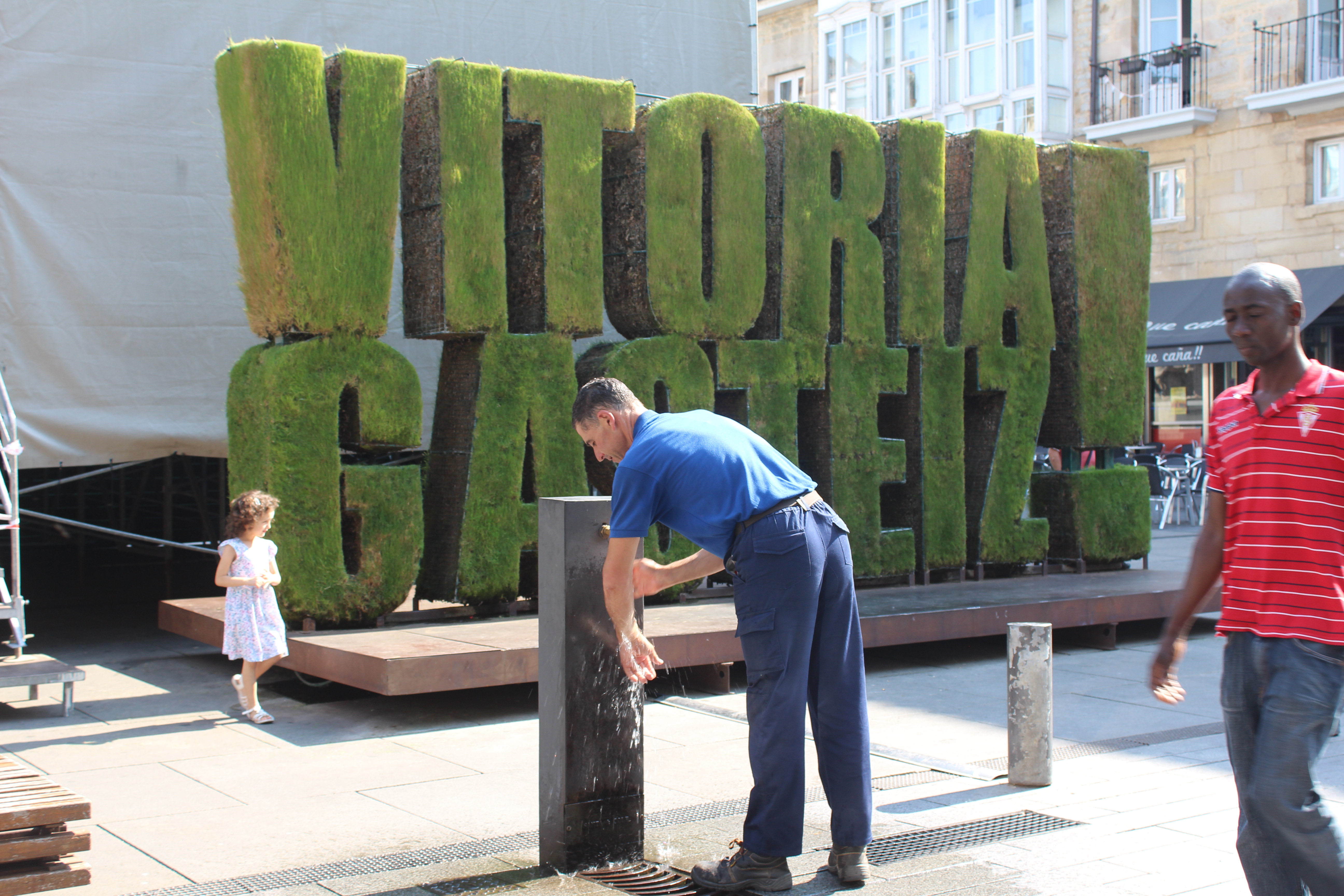 Vitoria-Gasteiz: Blue and Green All Over

5 September 2017 | by Vineeta Shetty
While many cities are throwing a ring road around their conurbation as a garland of progress, Vitoria-Gasteiz opted to gird itself with a 30 kilometre Green Belt, connecting six peri-urban parks.

The Basque political capital in northern Spain, Vitoria-Gasteiz visualizes itself as three concentric circles, with the city itself at centre. The “Green Belt”, a semi-natural green area, surrounds the centre and brings nature into the city. The Green Belt, which was partially recovered from degraded areas, such as gravel pits, burnt ground and drained wetlands, has not only contributed to improvement in biodiversity, but also reduced pollution and flooding episodes, boosted employment and tourism and fostered greater citizen involvement and well-being.

The third circle is dominated by forestry and mountains. Forest in fact covers a third of the municipal area, in addition to which there are rivers, wetlands, hedges and meadows, acknowledged as European Protected Natural Areas.

Its nomination as European Green Capital in 2012, the first city to have won the accolade in southern Europe, was a culmination of 30 years’ of commitment to sustainability.

As one of Europe’s cities with the largest proportion of green areas per inhabitant, approximately 45 sq. metres per person, it has managed to ingrain recycling habits and policies by its citizens who cycle or walk or take public transport as much as possible and tend to some 210 organic farming plots. An awareness-raising campaign dubbed Verde por Fuera-Verde por Dentro (Green Outside-Green Inside) has generated a strong sense of civic pride and ownership, helping to foster the city’s green conscience.

Vitorians take intuitively to civic initiatives such as one to reduce water use, enabling the city to cut its consumption by 18.5% since 2003. Almost 40 groups such as neighbourhood associations, environmental groups, unions and institutions, have been taking part since 2000 in conserving and protecting the natural and urban environment. A dozen civic centres scattered around the city are where citizens gather for sports and cultural activities, but also where ideas can be tested by the local government. Ekalabora was set up to gain mileage on the Green capital award, drawing volunteers to participate in local initiatives. 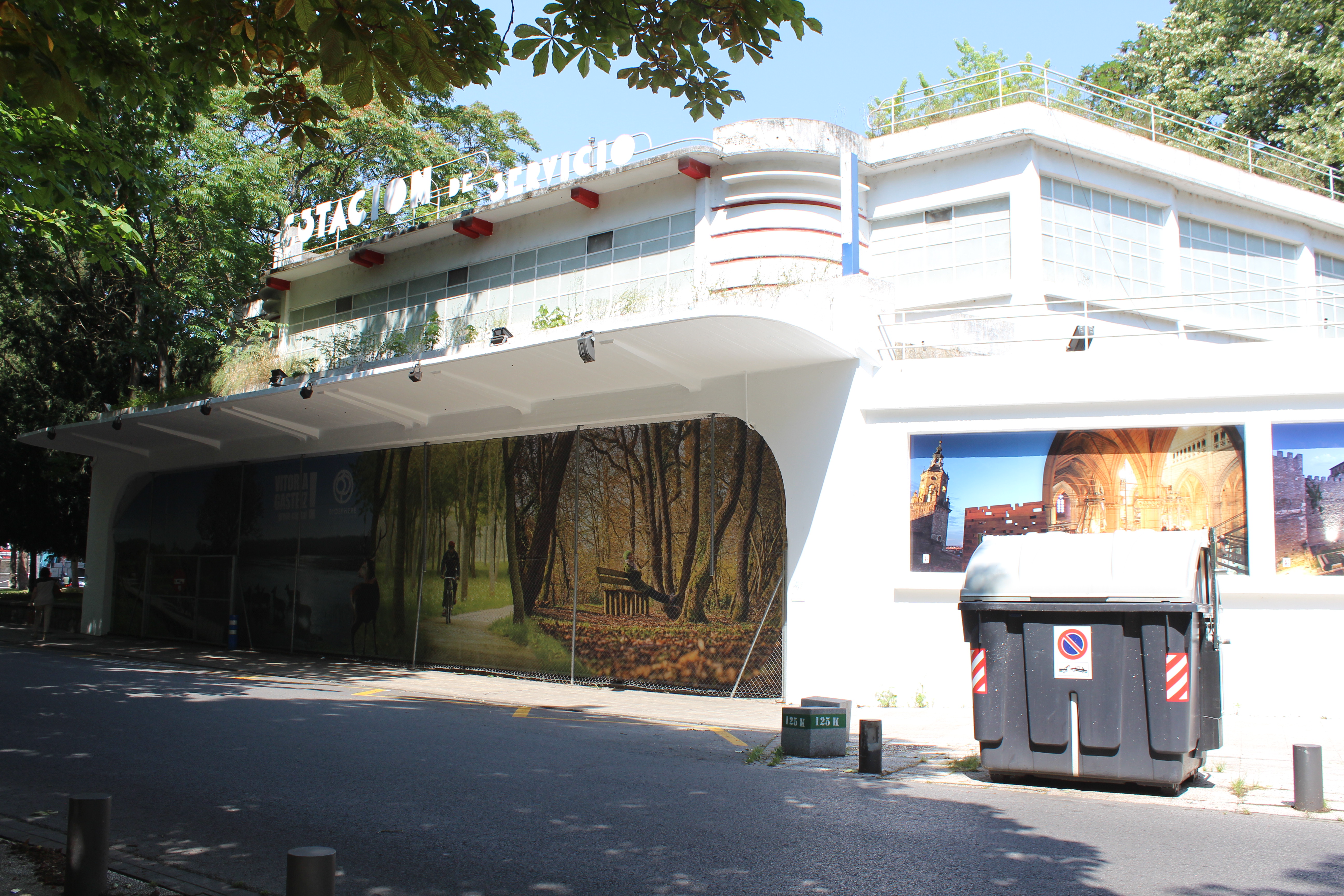 As citizens give up their cars to walk and cycle, an Art Deco petrol-filling station is finding a new life as the city's tourist office.
Vitoria has also managed to get its aeronautics, automobile, energy and machine tool industries behind its green agenda. Mercedes has its only factory in Spain here. Michelin and Airnova, which assembles airplane wings for Jumbo Jets are also based here. Among the multinational car companies that have moved in, one is developing the first electric van on the market. Another, CIC Energigune, is dedicated to alternative energy research. Companies occupy more than 9.5 million sq metres of the municipality and 700 of them took the Green Pledge in 2012, promising at least one environmental measure in their processes.

Hosting a population of 240,000, Vitoria is classified as a mid-sized city. But more than 80% of cities in Europe are of a similar size, city administrators point out, in their bid to make Vitoria-Gasteiz an environmental benchmark on the continent.

Green Interiors is a novel initiative of the city, whereby it has restored the medieval quarters to its pre-1300s status. Revitalising the city, for example putting up ramps to improve access to the medieval quarter, also prevents the young from decamping, a fate of many mid-sized cities.

Its €22 million Bicycle Master Plan created a public bike system as long back as 2006 with a network of pick-up and drop-off points across the city. By 2011, there were 17 pick-up points offering 350 bicycles free of charge. Uniquely, the service takes into account the needs of people with disabilities, providing tandems for the visually-impaired or tricycles for people with reduced mobility. Better management of freight distribution and widespread low-speed zones have also contributed to making streets citizen-friendly.

Private transport was discovered to be responsible for 29% of CO2 emissions in 2006. Through a combination of measures: a new integrated transport grid, overnight tripling of parking tariffs in the city centre, an improved pedestrian and bicycle network and traffic calming on 47 streets, Vitoria-Gasteiz has managed to reverse the trend in rising car usage, displacing that with walking and cycling. City officials believe their modal split of traffic now places them ahead of forerunners like Freiburg and Copenhagen.

Waste-management projects have achieved higher recycling levels than in most Spanish cities, and Vitoria is generating power from the flow of effluent water from sewage treatment. Next, the city has the long-term aim of becoming a carbon-neutral zone, with an interim goal of cutting emissions by half by 2050.

The city prides itself as having the highest proportion of public housing in Spain and allocates 1% of its budget to international development cooperation.

What other cities in Europe brag about, Vitoria has already quietly accomplished. Pilar Cengotita, international relations executive for the council says, “Very often, we are invited to other cities to observe best practice, only to find we have been already doing it in our city, a long time back.”
Half a decade on, Vitoria-Gasteiz continues to push the envelope of sustainability and climate change mitigation.

Solar and biomass already power two-thirds of the public buildings. In addition to a plan to convert to energy-efficient lighting, the City Hall and Central Bus Station are targeted for conversion to a geothermal circuit. With an eye to saving 36.2 million KW, buildings built between 1960 and 1980 are targeted for refurbishing and retrofitting.

Its new food and agriculture strategy aims to shorten the circuit between providers and consumers. Vitoria Gasteiz is surrounded by 64 small villages which are the bread basket for citizens, who eat well. Now, vacant plots are being developed in the neighbourhood of Lakua for growing fruits and vegetables.

This nationalist mayor, Gorka Urtaran, however, is not content with environmental sustainability, but has hinted at the need for more social sustainability in a conservative city that has previously profiled Muslim minorities as welfare sponges. "We must move towards cities that guarantee the highest quality of life of their inhabitants."

But all this comes at a price. The city is not completely out of debt. Local councillor Nerea Melgosa Vega says 32% of the city’s gross income derives from industry, 10% from buildings, property and real estate and 5% from the rural economy.

Though the competition is on between cities for Horizon 2020 money, EU structural funds are diminishing for northern Spain, which is seen as affluent and self-sufficient. The north gets 50% of what it asks for, while the south of Spain may get 80%. This has prompted a brainstorm of ways to improve incoming revenue. “We need to control and massage open data and translate them into readable format,” says Melgosa, who has also recognized the need for innovation centres and start-ups to boost the local economy. “We have exemplary practice but we don’t sell ourselves well,” she admits.

Local universities, with solid competencies in electrical, automobile and environmental engineering, pharmacy, liberal arts, business and social work, have been a little less speedy in insinuating themselves in the triple helix of city life and may be a clue to the ongoing success of local entrepreneurship. “Gradually, they are seeking themselves as stakeholders in the city’s success,” says Melgosa. “They are getting that into their brains.”

The Basque character, in contrast to the mainstream Castillian nature, is low-key. But money is managed by the women of the house, and with the economy and environment department of the city council shephered mostly by matriarchs, the city is en route to making its green credentials pay.

"Sustainable cities, in addition to pursuing environmental sustainability, must also be sustainable from the point of view of their social policies: they must be social and fair. We must move towards cities that guarantee the highest quality of life of their inhabitants."

Vitoria-Gasteiz: Green and Blue All Over