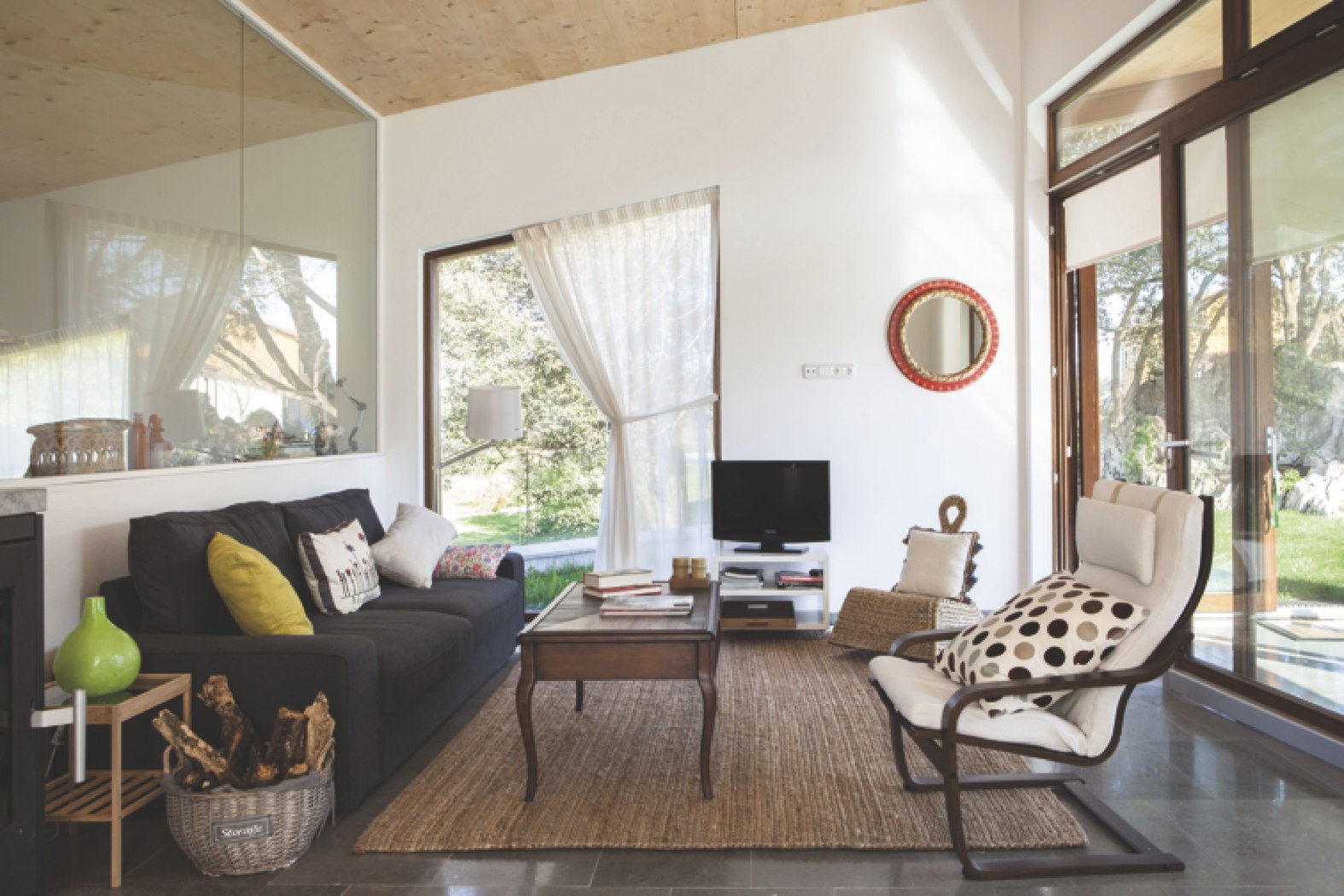 In December, at the UN Climate Change Convention in Paris, politicians will struggle for an agreement intended to lead to the drastic reduction of greenhouse gas emissions. The transition from fossil fuels to renewable energy sources that progressive countries will push for, implies an increased efficiency of energy use.
The building sector is a major energy consumer (e.g. it consumes 40% of the total energy in Germany). Fortunately, in this sector, technically mature high-efficiency solutions are available and self-regulation and prodding by far-sighted municipalities, assured that the first Passive House was built in Germany almost 25 years ago. Today, this building still has a heating energy consumption that is approximately 90 % lower than in traditional German houses.
Tens of thousands of Passive Houses have since been constructed in Germany and all over the world. And an increasing number of municipalities have committed themselves to the Passive House Standard as part of their overall sustainability strategies.

German municipalities lead the way
Climate protection begins at the local level and reducing energy use in buildings is one of the most important tasks. Many local authorities have therefore taken the initiative in recent years to promote the use of highly efficient Passive House technology. When formulating local efficiency and climate protection objectives, local authorities should not just limit themselves to the fulfilment of national requirements. They can often draft their own, more ambitious, plans.
Cities and communities have, in fact, played a leading role with regard to energy efficiency in recent years. Many German regions such as Hanover, Heidelberg, and Frankfurt, are already realizing Nearly Zero Energy Buildings on a large scale by adopting the Passive House Standard in combination with renewable energy.
A striking example of forward-thinking planning is Heidelberg Germany’s new city district, the Bahnstadt. The Bahnstadt is rapidly becoming a well-respected model for the implementation of high sustainability standards in urban development and was honoured with the 2014 Passive House Award in the “Passive House Regions” category. Established on the site of a former freight yard, the area will eventually provide housing for 5,500 people as well as office space for 7,000.
The 116-hectare district includes a student campus, offices, industry, retail, leisure, housing and associated services, demonstrating the flexibility with which the standard can be applied. It is supplied by a district heating network based on woodchip-fed combined heat and power. As such, the area is net zero in terms of annual carbon emissions – all heating and electricity needs are supplied entirely via renewable sources.
The development has been so well received, that the second phase of construction was accelerated by two years. Public and private investment through 2022 has been estimated at €2 billion.
The City of Heidelberg also offers subsidies to aid the ultra-low energy development of the region, for example, by providing €50 per square meter for residential Passive House buildings – up to a maximum of €5,000 per unit. 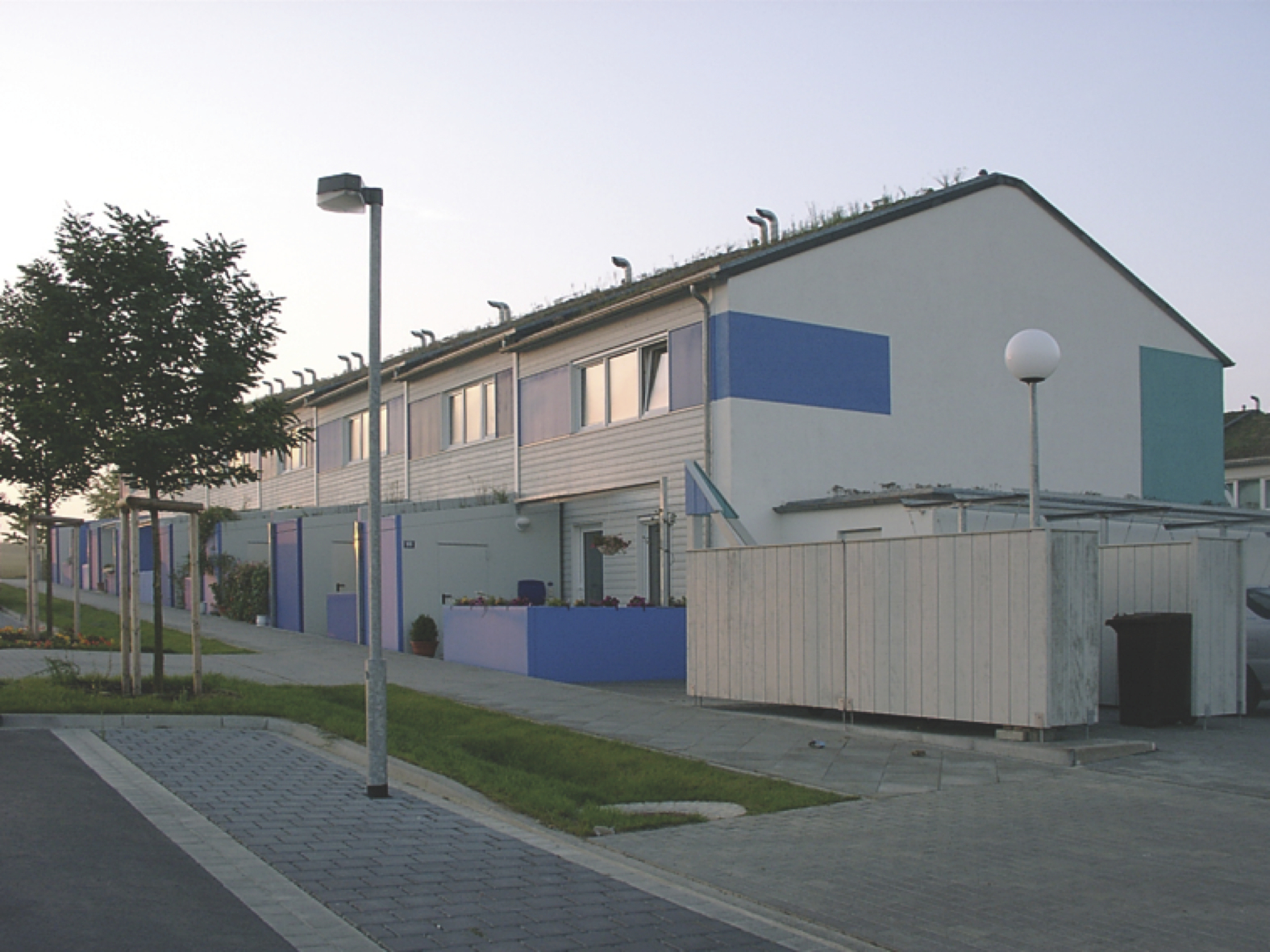 Hanover’s success story began as early as 1998 with the completion of a row of terraced Passive Houses in Hanover’s new Kronsberg district (right), built for the EXPO 2000. At around the same time, the regional climate protection fund, proKlima, was established via the municipal energy supplier, enercity Stadtwerke Hannover AG, and the Hanover City Council. The fund channels over €3 million annually in direct subsidies, consulting, and quality assurance for Passive House new builds and retrofits with the provision of renewable energies. This innovative funding mechanism is fed by Hanover and select neighbouring cities, a 0.05 cent per kilowatt-hour tax levied on consumer gas bills, and enercity Stadtwerke, which transfers a portion of its profits to the fund. The effect of this fund on the local economy has been remarkable: for every euro spent in subsidies, an estimated €12.70 flows back into the region.

The zero e:park, (see its REWE supermarket at left) the development of which was supported by the fund, stands as a particular highlight.

This almost carbon-neutral district in Hanover-Wettbergen comprises 300 Passive House residential units, complemented by the use of solar-thermal energy. The use of hydro power is also planned. A hugely successful concept, future home owners may buy land in this area on the condition that they build to the Passive House Standard. 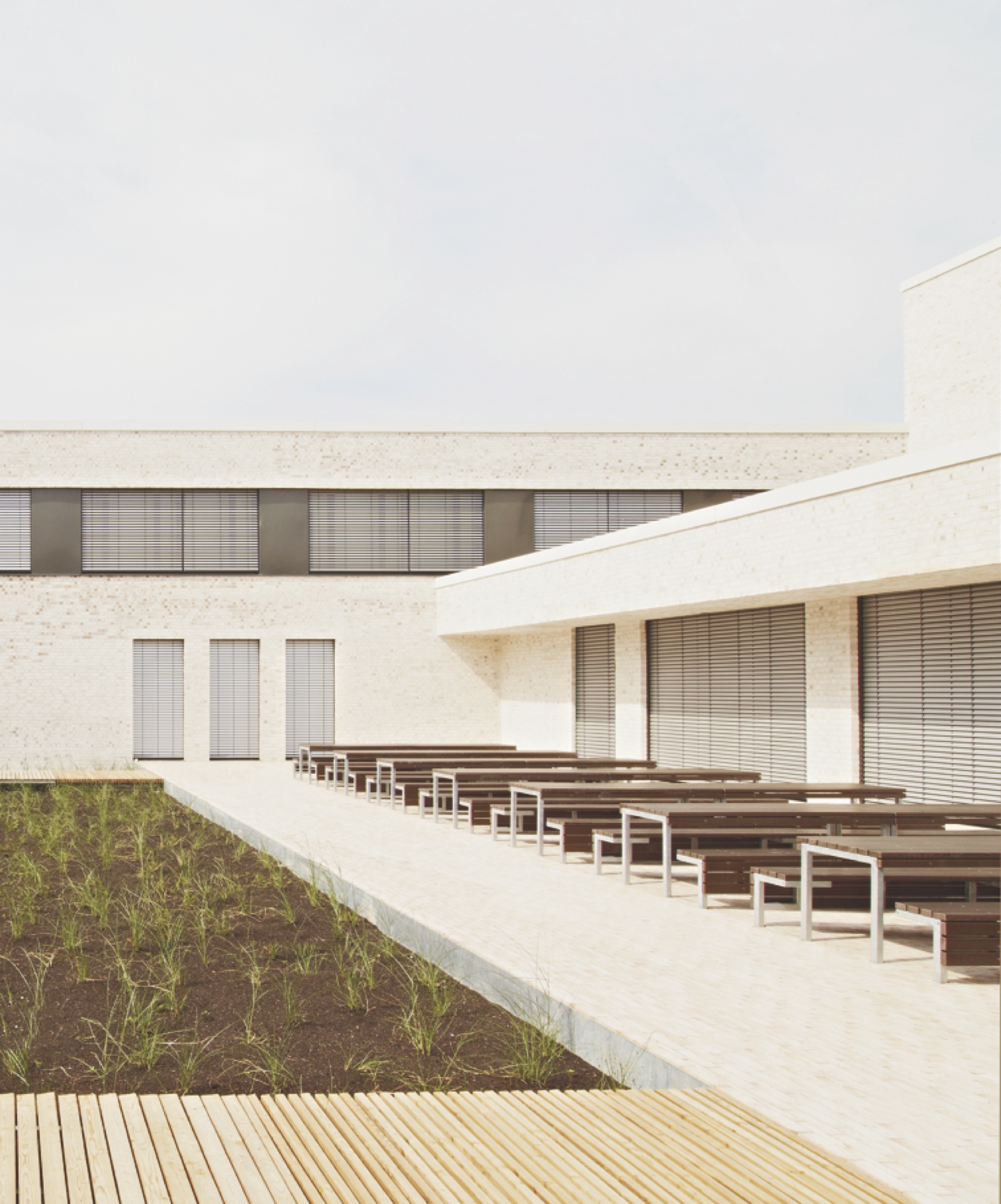 The City of Frankfurt has shown its commitment to climate protection through integration of the Passive House Standard and renewables in its planning activities. It is currently developing a master plan to reduce greenhouse gas emissions by 95% by the year 2050, leading the way to climate neutrality. The plan includes the use of the Passive House Standard in the building sector and stipulates that the city be fully supplied by renewable energy sources by 2050.
Initiated as early as 1991, current building policy consists of two main pillars: the Climate Protection Concept and the Passive House Act. The Climate Protection Concept covers a wide range of proposed measures for reducing CO2 emissions, including an integral communication concept relating to climate protection, a quality
standard for energy-efficient renovations, capacity building campaigns, and financial support through ‘Frankfurt’s Passive House Loan’.
The second pillar is the Passive House Act. In 2007, the City Council of Frankfurt decided that all municipal buildings, as well as all buildings belonging to the city’s own housing associations must be built to the Passive House Standard.
It also stipulates the use of renewables. Today, more than 2,000 Passive House dwelling units have been built in Frankfurt. The municipal housing association, AGB Holding Frankfurt, proudly calls itself “The Passive House builders” – a tagline that stands as a testimony to the city’s dedication to the progressive standard. 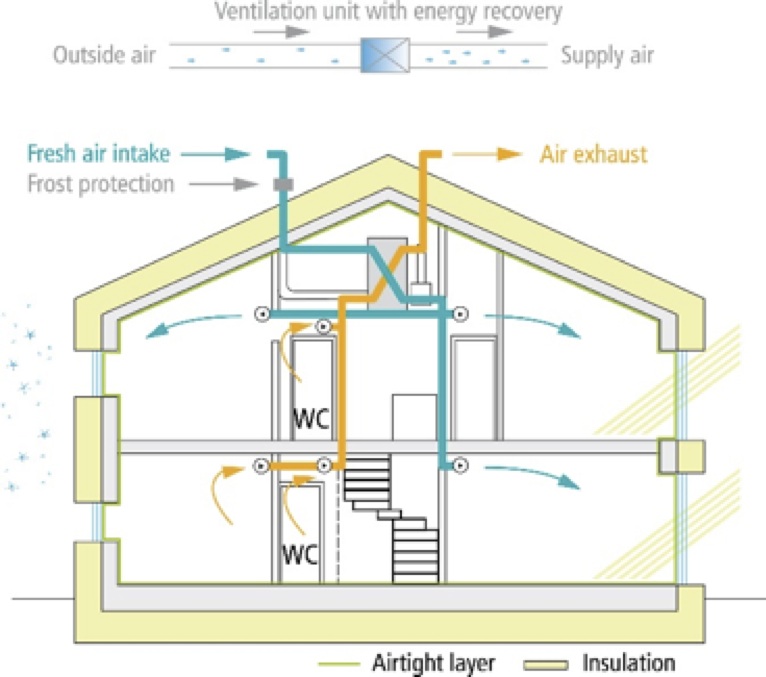 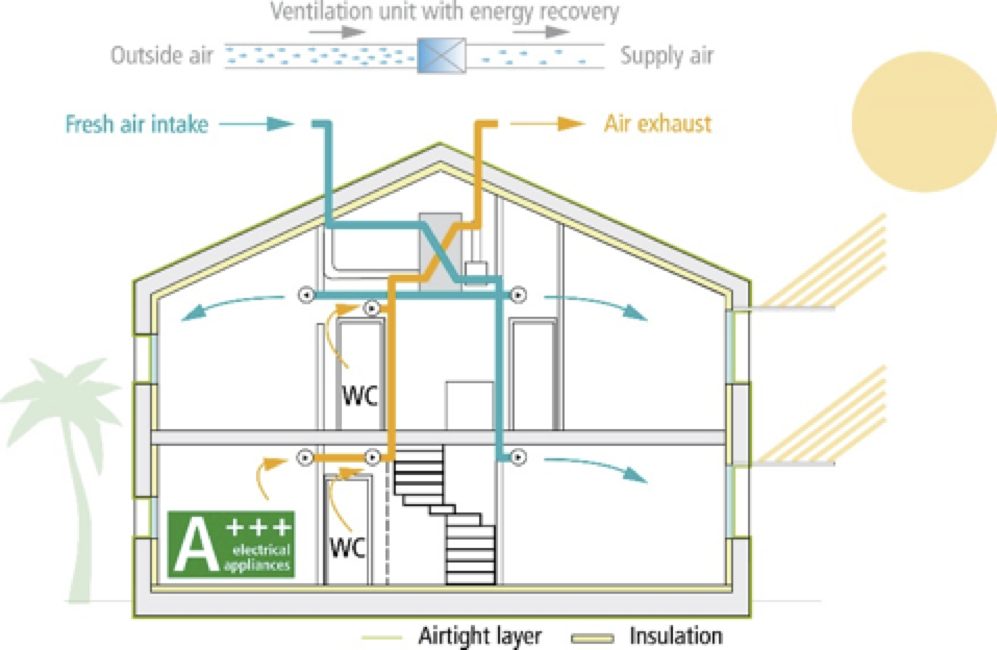 Both the advantage and the challenge of the Passive House Standard is that it can and should be applied to regional building traditions and climatic conditions.

In cool, temperate climates, (see schematic, left) the Passive House concept calls for the reduction of peak heating loads so as to facilitate the provision of high comfort levels with simple and reliable mechanical systems.
This also serves buildings in warmer climates well in terms of their peak cooling loads (see schematic, right). Insulation is crucial, although Passive House buildings in milder climates may need less insulation than those in extremely hot climates.

High quality, insulated windows that are
either double or triple-paned, depending on the climate, are essential. In some locations, the use of solar protective glazing is recommended. Exterior shading, whether fixed or moveable, is of critical importance in blocking solar heat gains during the summer period. Internal heat loads, just as in Passive Houses elsewhere, should be minimized through the use of efficient appliances and lighting. Finally, making use of night ventilation by opening a few windows through the night to cool the building has proven to be a very efficient method of passive cooling in locations where humidity levels are moderate. In warm climates, active cooling may prove necessary. Passive measures keep cooling needs extremely low. 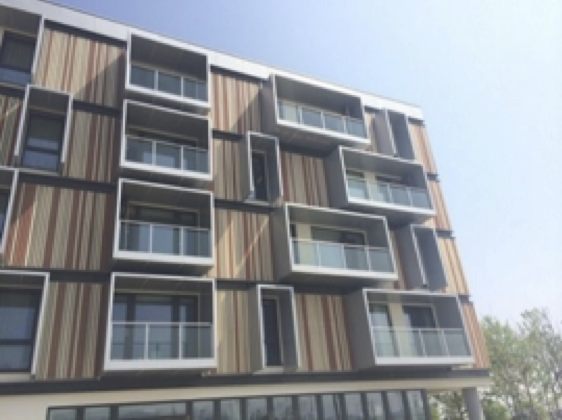 The Passive House Standard offers a cost-effective, energy-efficient and high-comfort building solution for almost any part of the globe. The paths that lead to it and thus the design of any particular Passive House building, however, depend greatly on the local climate as well as building traditions, building site, and building type.

Appropriate planning is of the essence, so that they may be covered with a relatively small, highly efficient cooling system. In Passive House buildings, cooling via the air that would, in any case, be supplied by the ventilation system becomes possible with little to no additional cooling via air recirculation. Apart from the reduced energy demand, this also implies higher comfort: with Passive House practices, noisy, draughty air-conditioning systems are no longer needed!

In climates where not only high temperatures but also high humidity is an issue, dehumidification may be required. Indeed, conventional buildings in hot and humid climates are often over-cooled in an attempt to deal with high humidity.

The excellent level of airtightness in a Passive House helps reduce the amount of humid outdoor air entering the building. Ventilation units with energy recovery (heat and humidity recovery) diminish humidity loads even further. In many cases, the remaining dehumidification demand can then be covered by the cooling system. Solutions that allow dehumidification independent of cooling are recommended, in order to avoid unnecessarily high energy consumption. 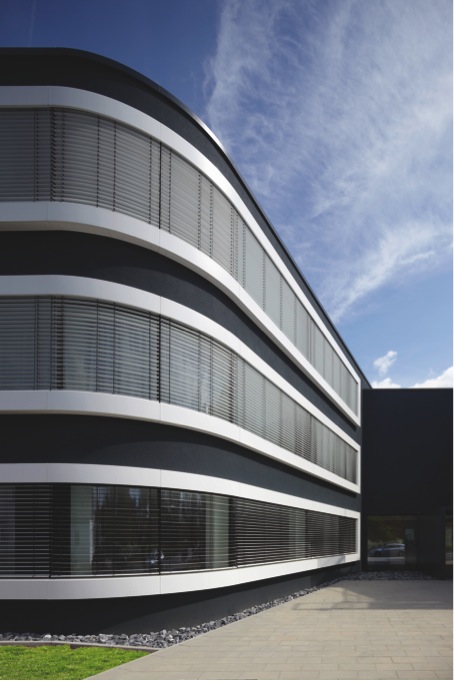 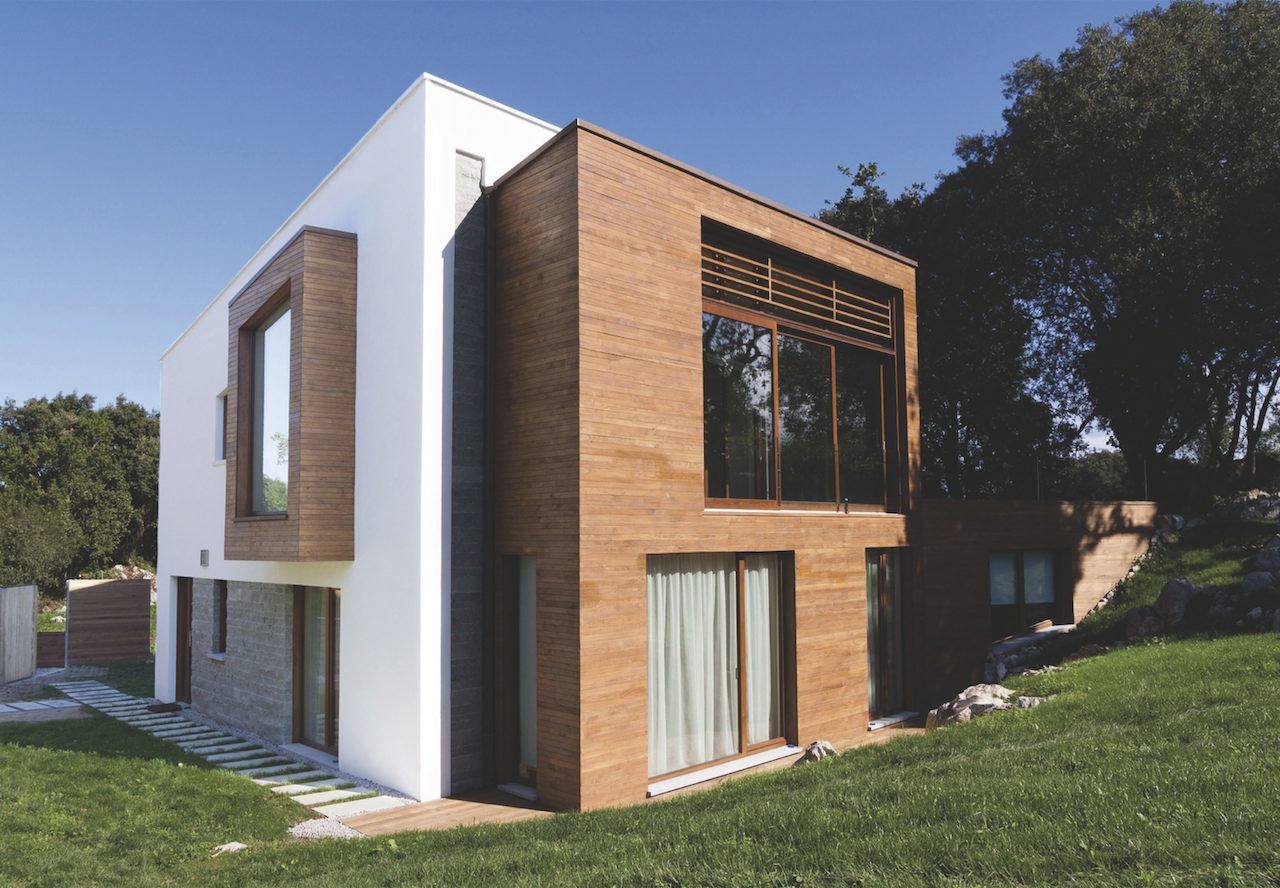 Passive House as a precondition for a sustainable energy supply
To limit the extent of man-made climate change, our energy supply will need to be covered entirely from renewable sources in the near future. However, the available space for renewable energy harvesting (e.g by photovoltaic systems or wind turbines) is limited or competes with other types of land use (e.g. when farm land is used for bio mass production). Moreover the renewable energy resources are not available at all times - after all the sun doesn’t shine at night and the wind doesn’t always blow - causing the need for costly and ‘lossy’ energy storage.

Therefore the transition to alternative energy sources will only be practically and financially feasible if energy consumption is drastically reduced at the same time.

In the Central European climate, Passive Houses need only 10 % of the energy demand for space heating compared to traditional buildings. At the same time, thermal comfort and indoor air quality improve significantly.

Equally in hot and/or humid climates, drastic savings can be achieved by building to Passive House standard. The moderate additional investment for this will pay off during the lifetime of the necessary
building components.

The newest version of the Passive House criteria published in 2015 takes into account the suitability of a building for energy supply from regional renewable sources. Regional and temporal limitations for renewable energy supply as well as the resulting storage losses are represented in the Renewable Primary Energy (PER) rating.

Buildings with a low PER demand will require only very small investments in renewable energy generation facilities for a fully renewable supply.

Under this rating, heating energy is more critical than cooling energy, as heating requires more seasonal energy storage (generally there is not much solar irradiation on photovoltaic systems in wintertime, when the heating demand is highest).

In this sense Passive House is a truly sustainable energy standard.

However, it is also very sustainable in a practical meaning. Passive Houses - as the name implies - are based on passive measures such as thermal insulation, insulated windows, air-tightness and heat recovery ventilation. These very simple and well-proven components work without any complicated mechanical or electrical systems. The energy savings can reliably achieved for years to come with minimal need for maintenance or repair.
Photography Copyright