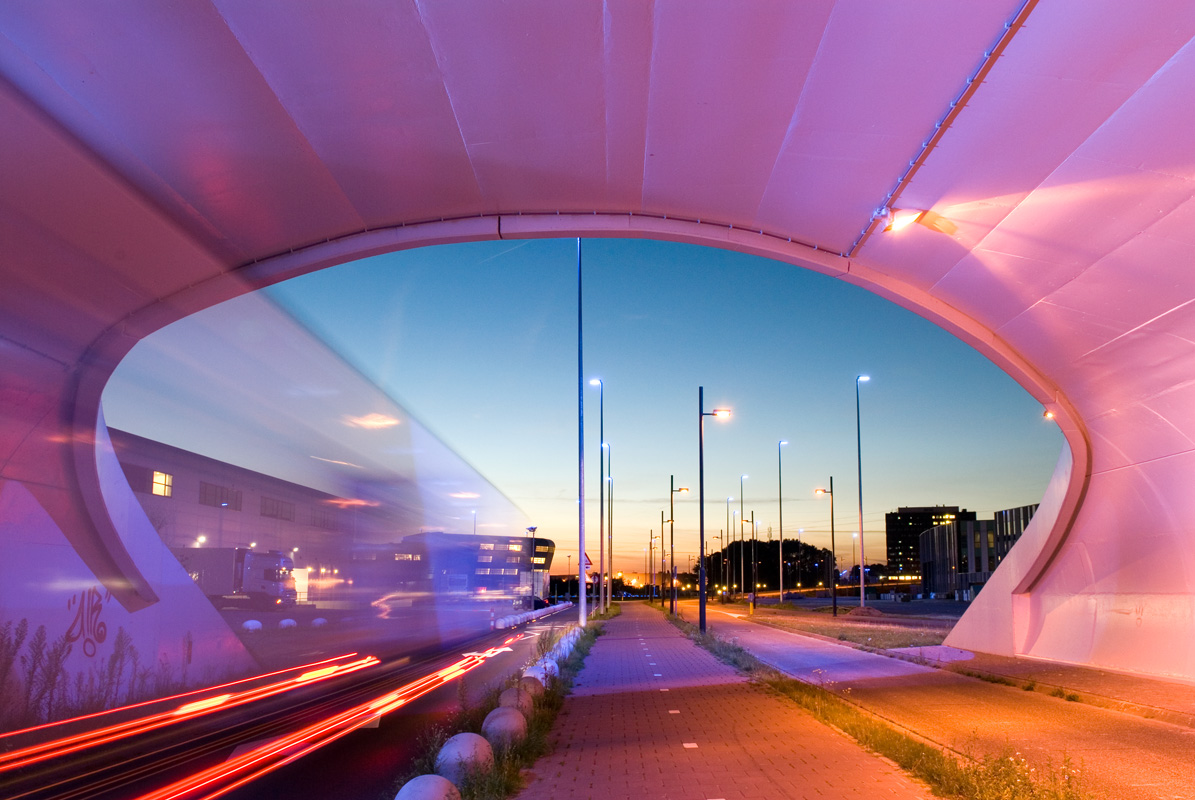 27 August 2015 | by Philip Allin
Any first time visitor who flies to the Netherlands notices it long before they land: this is a well-organised country. From your window seat, you can make out roads, canals, fields and entire conurbations all arranged neatly in geometric formations and parallel lines. Indeed, you can read the country from the air; it is famously as flat as the maps that, in their new incarnations, you now access via your phone.

Schiphol Airport is most airborne visitors' introduction to the Netherlands. It is a global air transport hub the size of a small city, built a century ago on land that was reclaimed from brackish marshes that were no good to anyone. Its total annual passenger movements are around four times the population of the country, and it serves as a model of logistics, efficiency and communication the world over. In this sense, it is a smart city, save for the obvious lack of permanent inhabitants, elected governing body, public access, and so on.

To find a true city that matches the smart description, we have to journey about 75 km to the south east. Scaling up smart thinking from the domain of small apparatus up to the built environment is best exemplified by a city that previously was not well known outside the Netherlands but is enjoying a recent boom in popularity. Amsterdam is legendary for its socio-cultural progressiveness, its golden-age heritage and internationalisation, and Rotterdam is regarded as a model of rebuilding: devastated during WW2, it is now predominantly a twentieth century construction, and a modern, global leader in logistics, trade and architecture. But neither of these cities can hold a candle to Eindhoven, the self-styled 'city of light'.

Eindhoven has been ranked (by Forbes and the EU, among others) the most intelligent city since 2011. Why? For starters, the Dutch 'Silicon Polder' is an absolute hive of intellectual activity. Its Technical University is world-renowned, and the city is an important crossroads for national trade and industry and therefore well-equipped for innovation. Royal Philips was founded almost 125 years ago in the city, and the company has a long-standing and symbiotic relationship with Eindhoven. The light-bulb factories it built left a legacy for Eindhoven as the 'licht stad', or light city.

Google, Facebook and Apple are drawing up plans that are fundamentally similar mega-campuses which nevertheless do little for their Californian communities; they are essentially vast gated communities. Compare that to Eindhoven to see what a profitable corporation can provide a city besides jobs: urban branding, a sense of pride and community, business incubators, even a 'Brainport' – to put the city’s economy on par with Amsterdam Airport and Rotterdam Seaport.

Brainport focuses on solutions to worldwide problems in the areas of energy, mobility and health and claims to generate 37% of all patents registered in the Netherlands every year.

2015, the International Year of Light
It is perhaps more than a happy coincidence that 2015 is the United Nations Year of Light and Light-based Technology. An international conference, the Smart City Lighting Event, held in Eindhoven this summer was the meeting ground for politicians, academics, scientists, designers, business people and interested citizens. As with any dense conurbation, traffic is a problem in Eindhoven. The city, of about half a million people, is cut through, and surrounded by, several multi-lane highways that redirect traffic in, out and around the sprawl. Queues are frequent, pollution unavoidable. An obvious approach is to give in to industry and commit to building more and wider roads, or to pay heed to academics and voters, and subsidise, say, a large-scale bicycle programme.

But Eindhoven is taking a more interesting middle ground. While commuters are gently coaxed out of cars towards public transport and bikes, the city has not given up on the existing infrastructure.

As an instance, the municipality commissioned a local architect Har Hollands to work on a unique lighting concept for an underpass running under a major highway, which is part of the primary cycling infrastructure in Eindhoven and used by thousands of cyclists every day.

White LED strips on the ceiling of the underpass guarantee a level of light that satisfies safety norms. But more interestingly, the intensity of the blue light reflects the traffic movements on the lanes of the flyover above. Mounted at the level of the bearings of the bridge, the blue LED lighting adds a mysterious and dimensionless feel to the space under the fly-over and results in a hypnotic show.

The city has also launched a novel project aimed at creating safe, sustainable lighting for cyclists. Colour-changing LEDs automatically switch themselves off when no one is around, and can be adapted to suit people's moods, ambient light, weather conditions and so on.

The city employs a dedicated lighting project manager, who has seen to it that each light can be individually controlled by computer, making the city comfortable and more energy-efficient. Soon, such pathways will remember the routes walked most often, and could help guide people along those routes.

Separate schemes have included a glow-in-the-dark cycling path that charges itself by day, and which was inspired by Van Gogh's painting 'Starry Night'. Evocative stuff, and it goes to show how the integration of smart technology is about the combination of ideas from various fields.

Solar-powered sound barriers
Another combination is the solar-panel sound barrier, being erected along the motorways just outside Eindhoven. In a year-long test by the Technical University, scientists have included luminescent solar concentrators, or LSCs, into the sound barriers. These translucent layers are coloured, which increases attractiveness, but their main advantage is that the LSCs filter and steer light towards solar cells in the structural edges of the barrier, providing a continuous source of solar power.

An earlier plan was the adoption of a sound-proofing barrier made of drilled aluminium poles clumped together in vertical bunches. The holes are designed for maximum sound absorption, and they work a treat. Further refinements included filling cavities with a proprietary pollution-filter, which increases the sound barrier's usefulness and value, without harming its original purpose.

Smart Highway
In all cases of applied technology, it is this combination that proves key to success. Harvesting a solution from one field, expanding or adjusting where necessary, and then applying it to another. We see this in the design of a ground-breaking scheme, one for which Heymans, a Dutch construction giant, has teamed up with artist Daan Roosegaarde to develop a 'smart highway' an asphalt cover that displays crucial information to drivers. In cold weather, large images of snowflakes appear on the road, and in wet weather the images change to rain drops. It's all automatic, based on smart materials, clever use of predictive technology (how far ahead of a speeding car do you indicate a slippery road?), and innovations from other fields. One lane of the smart highway actually recharges hybrid cars as they drive along it.

This kind of innovation requires us to think of light as more than an intangible aspect of our built and designed surroundings. Lighting is a product and more importantly a design tool that can help solve other problems. This is understood by Eindhoven’s municipal government. As vice-mayor Mary-Ann Schreurs explains, “Don’t see light as the objective … people aren’t interested in light, people are interested in leading a wonderful life, in a wonderful city”.

The Smart Citizen sees a similar approach with the Dutch Institute for Technology, Safety and Security (DITSS), an innovation platform that takes a holistic view of tech-based societal improvement. An example is crowd control. This is a long-standing problem in urban areas: how do you make sure shoppers, sports fans and festival-goers are safe and guided to where they need to be, but also manageable in case of any incidents?

In a world where emergencies, as well as celebrations, are broadcast live, it is paramount for governments to ensure the safety of groups of people. Simple methods are visual: ‘EXIT’ signs in public buildings, lighting strips in aircraft, and so on. But much more is possible when tech-minded designers get to grips with social control problems, which have a fuzzy nature.

Consider an night in a busy city centre. People are inebriated and having fun when a scuffle breaks out. While the police steps in to sort it out, cameras are tracking the commotion and do a clever thing. In the surrounding streets, the lighting is subtly changed. This induces people to take a slightly different route to their bar, cinema, or home, and keeps the hubbub to a minimum. In turn, the police to get on with their job safely and (relatively) quietly.

This is the kind of system that DITSS is developing, in this case with Royal Philips and the Technical University. The team is still working out what colour and intensity of light helps best, but early trials suggest this kind of gentle persuasion is far more effective at crowd control than the overt security presence that we recognise from usual urban situations.

These few examples demonstrate Eindhoven’s case, as well as the power of smart lighting and infrastructure specifically to humanize an otherwise highly mechanised built environment, and thus effect positive change in our daily goings-on.

There is, of course, another side to the smart coin. Handing the reins to the technocrats has the implication of setting us up for a dystopian future of 24/7 surveillance, mass data-gathering and a plenipotentiary military-industrial-complex.

This theme is a well-trodden path in popular culture, but as history has shown, we rarely imagine a future quite as surprising as the one we come to inhabit.

It doesn't have to be this way. No one is designing smart cities as online police-states. But pervasive technology does have a way of making our humanity feel redundant. As ever, it is up to us to maintain an open dialogue on the technology that we want to have within the fabric of our cities. The great achievement of the smart city is the combination of innovative thought with high-tech software and hardware, and even high-level education. Finding those combinations – whether as energy-producing wind screens, light-guided cycle paths or whatever – is the key, and innovation lies in finding effective, engaging and exciting applications. This way, the goal of the smart city is clear: to help create better, healthier, safer and more efficient places for all of us.

Philip Allin (@archphil) is an architect, writer, and diving aficionado.