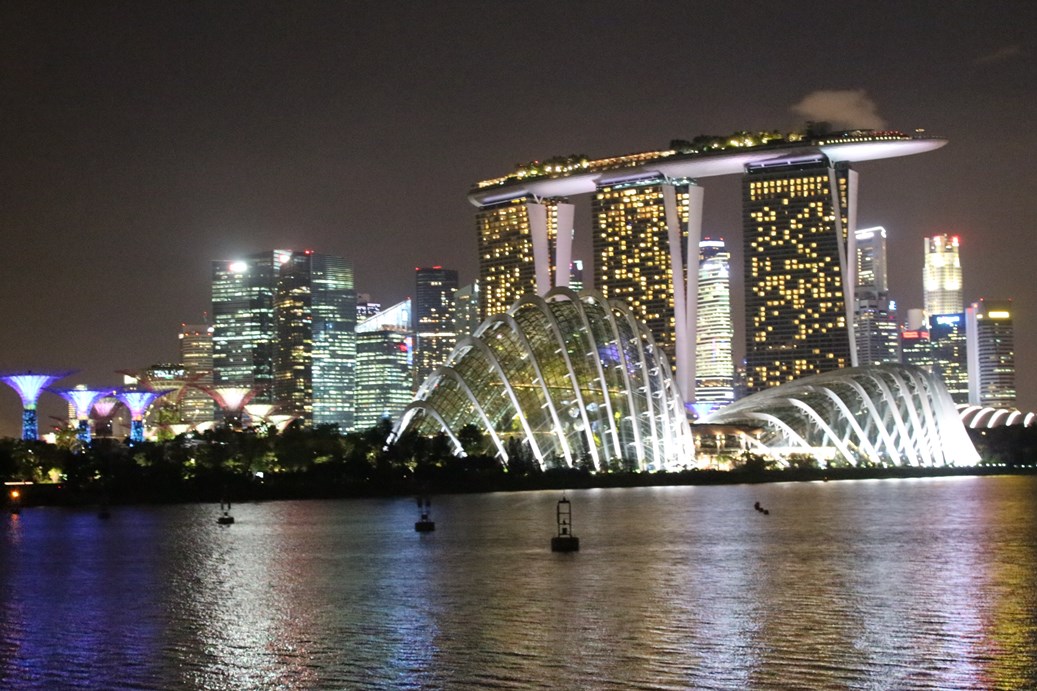 5 December 2014 | by Vineeta Shetty
Food resiliency is a growing worry in the island nations of Hong Kong and Singapore. Lacking a rural hinterland, they depend heavily on imports for sustenance. Where once Hong Kong grew 70% of its own produce, its fabled rice terraces have been dug up for luxury flats and cyberports, so it now produces only 1.7% of its own food. Likewise, in Singapore, farms made up 10% of its 280 square miles and now that has reduced to 1% to make way for shops and housing colonies.

Consumer concerns about heavy metals in China-grown vegetables and fruits is driving the two countries to look for ways to increase their self-reliance on food. Urban gardens and rooftop vegetable patches are popping up across Hong Kong's territories for pleasure more than profit. But Singapore is taking measured approaches to develop a prototype to reduce its biocapacity deficit while perfecting its agricultural productivity.

Lim Chu Kang, the northwest corner of the island, has sprouted several organic and acquaponic farms. On a couple of hectares in this quarter, SkyGreens,a private enterprise partially funded by a former public servant, is one example of an agro-preneur who has patented low-carbon hydraulic water-driven technology, where vegetables are being grown in outdoor green houses. Leafy southeast Asian favourites like naibai and caixin are being cultivated on some 2000 modular A-frame stainless steel towers that are between 3 and 9 metres high, approximating a 2 to 6-storey building.

The company claims to be the first in the world to grow tropical vegetables vertically in the tropics. The crops are grown in trays that rotate over an 8-hour period, alternately receiving sunlight on the top of the tower and nutrients from a water trough at the bottom. The farm strives for a low-carbon footprint, tapping solar for energy needs.

The novelty of this technique makes it an inexact science, subject to mechanical failures, over-nutrition and burning. Manual labourers are needed to check light and humidity. SkyGreens turned to the Agency for Science, Technology and Research (A*Star), Singapore’s official agency for innovation for a solution to keep costs down and optimise its yield. A*Star’s Institute for Infocom Research (I2R) has been closely involved in the nationwide plan to create a “sensor fabric” across the island, having developed a unified hardware and software architecture and platform for city-scale sensing.

Temperature, moisture and light are the basics for determining inputs like water, energy and natural resources to maximize the productivity of the vegetables and I2R put sensors to work on the soil trays to take readings of these indicators.

Off-the-shelf sensors interconnected by wireless feed a console that provides Sky Greens farm manager a heat map of the farm, visually displaying the heat, light and humidity distribution on the property. The interface is also set up to trigger alerts if hot spots are located, or if ventilation is not working.

At harvest time, the length and width of the leaf and stem of the plants were measured. Data collected from the sensors was analysed and one of the discoveries was that towers created shadows when they were too close to one another. The data from the sensors helped determine how the towers should be spaced out, based on the different levels of sunlight demanded by vegetables. Seasonal variations, the speed of rotation and where to plant what kind of vegetables all helped in redesigning the farm.

Dr. Tan Hwee Pink, programme manager for the I2R's Sense and Sense-Abilities project estimates that the sensor network helped improve yield by 20%. The naibai and caixin are already being sold at a fair price shops in residential areas, alongside Chinese imports. Tomatoes are awaiting their turn at the farm.

The next stage is to have the fresh greens grown on parking lots, national parks and school buildings on 4 by 4 metre towers. Sky Green’s experience has emboldened government-linked companies with links to China to package the IP and market it.

I2R provides wide-area mesh heterogenous wireless sensor networks that work with virtually all sorts of common infrastructure as backhaul to provide a robust, reliable, secure sensor network system to collect all types of environmental readings. The system works with all types of off-the-shelf sensors with common interfaces. As part of its sensor fabric plan, Singapore has deployed sensors in a number of settings:

• Pubic Utility Board (PUB), the national water agency, deploys a combination of closed circuit TV and 171 water level sensors around the island in drains to monitor water levels in drains and canals. Enhancing the real-time monitoring on site could speed response time and may pre-empt flooding, such as the one that affected Orchard Road 2 years ago.

• Sensors are also deployed in rubbish bins to sense how full they are, so authorities can dispatch personnel to clear them. Live feeds compare bins at various sites and the times of day they fill up, to schedule collection or spotlight areas that need more bins. Currently this is a pilot, but wide-scale implementation is planned by the NEA in tourist areas.

• Singapore is regularly affected by haze from forest-clearing fires in neighboring Sumatra. An upcoming testbed in Jurong Lake District will use a network of 1000 sensors to monitor light, temperature, humidity, dust and gases in the atmosphere.

While different government agencies have deployed sensor systems in Singapore, they tend to operate in silos and there is no sharing between them. Implicit in Singapore’s Smart Nation strategy is the plan to share more data across agencies to gain insights. The regulator, IDA, also has the official responsibility to provide open data to interested citizens. However, so far, notwithstanding its top position in e-services globally, the government has been sparing, rather than sharing.

Static data, such as the location of amenities, is readily available on the government portal, onemap.sg, but interactivity is a missing ingredient. The National Environment Agency, for example, makes pollution data broadly available for north, south, west, east and central parts of the island, updated every 3 and 24 hours, but not in the finer detail that developers need, critics point out.

While Singapore is prone to keep data away from its citizens, it is more receptive to selling its sensor technology expertise to other countries in the form of prototypes and IPs. Companies can take a license from A*Star and productionise in their countries. A*Star has, for example, collaborated with Smart Santander, the 5-city project of 3,000 sensors, where it has helped analyse data.